skip to main | skip to sidebar

What the gas pump said

Ok, here's the story behind the gas pump thing. Except for a very short time, my life has always been a mess. I mean my whole life from birth on. Sure alot of it was my parent's fault, but after age 23 when I finally moved out on my own, it was my own fault. I ended up in situations. Living from crisis to crisis.
Then back in '94, I was in the midst of just such a situation and I was filling up the car. Those messages that run across the LCD screen on the pump? usually they say thanks for filling up with crapo gas? It read, "If you want to escape your problems, then solve them."
I read it several times, and by the time I finished filling, then paid, the message had gone back to the regular message of try our great coffee or some kind of bullshit like that.
Now I know it sounds crazy, me in the middle of a crisis and the pump telling me what i needed to hear. Did it really read like that. Yes, it did. i know what i saw.
Now here, 15 years later, my life has been in crisis for a few years now. I have been following the gas pumps advice for about 8 months now. Solving the problems in my life, instead of simply trying to escape them.
Posted by Spooky Lil Girl at 3:52 PM No comments:

The Being Happy Thing 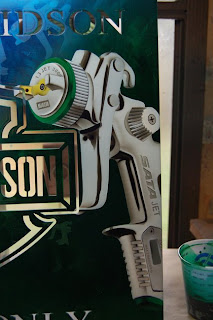 Strange thoughts on a wild strange day. Its about 4:30 Sunday afternoon and I'm sitting on David's back porch, on the streened in side. Its pouring rain out side and I'm writing on the computer. David is inside napping. soon I'll wake him. We just back from the Smoke Out. Rode about 100 miles from Rockingham. Got hit by the rain once, a real downpour. Completely soaked. Nothing like a riding a hardtail chopper with a short rear fender in the rain. You just have to laugh. It cleared up a bit and we stopped and I changed into dry clothes. Made it the rest of the way with a a few sprinkles. Now its raining for the real, the raining like a mutherfucker all day long, kind of rain.
My editor has my book ready for me to review but it is Sunday and I no longer work on Sundays.
The Smoke Out was ok. Some people were jerks to me, others were unreal awesome nice. But I knew in advance some people were gonna be asses due to the ex.
Don'tknow what the week ahead will be like and don't really care. It's Sunday, my day off. I had to starr having real Sundays or I would have finished losing my mind.
Saw that Michael Jackson has skin cancer. The dude was the king back in the 80's, and a sick nightmare joke ever since.
Sabel Star died last month but that is a blog post all in itself. For another time. Last year I has just gotten back the Smoke Out. I had ridden about 200 hard miles on the chopper. I was beat but I had a hot date that I could not miss out on. I had been excited for days leading up to it. I mean I couldn't believe he was even gonna meet me for that date. I had not met him in person yet.
Now I'm gonna walk in the house and wake him up. We're gonna go for Chinese food at the same we ate a year ago. That Sunday night after the '08 Smoke Out changed my life. I am happy. Its ok to be happy.
Posted by Spooky Lil Girl at 1:39 PM No comments: